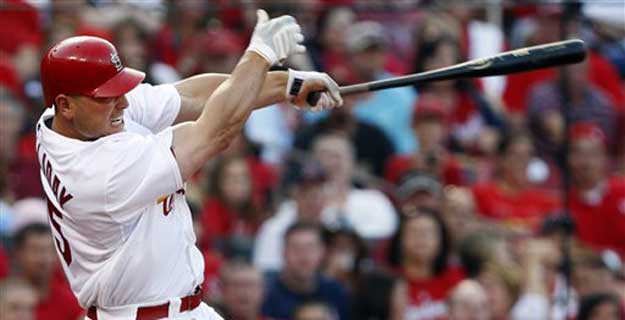 It appears that barring any 11th hour mystery teams entering the fold, the Cardinals and John Mozeliak might finally get the player they have targeted all off-season as early as next week. In an article written by Derrick Goold, some sources within the Cardinal organization say that a deal for Holliday is “gaining momentum” and that progress is “strong.” The length of the deal has varied, with most sources stating that it is between 5-8 years. It’s likely that the contract would be 5-6 guaranteed years, with several option years on the end. The likely terms of the option years would probably either be team options or vesting ones based on Holliday’s performance. The exact dollar amount is also an unknown at this point, but it is reported that Boras and Holliday want an $18 million average annual value. Since Jason Bay’s contract with the Mets is a $16.5 million AAV, it’s likely that Holliday will fall somewhere between $16.5 and $18 million range. It should also be known that any potential deal for Holliday will also include a no-trade clause, especially since the Cardinals gave one to Kyle Lohse last off-season and that Scott Boras has stated it is a priority for Holliday.
Overall I like this potential deal for the Cardinals. Signing Holliday would improve the club more than any other move that John Mozeliak could make (barring an unforeseen trade) this winter. With Allen Craig likely being worth around 1.5 Wins Above Replacement, if Holliday could replicate last year’s 5.7 WAR season it would be a 4.2 Win upgrade for the Cardinals. When you consider Holliday’s salary will likely be around $17-$18 million (or less if it is a back-loaded contract), the Cardinals would be paying around $4.17 million dollars per Win, which is a fair price. In fact, Holliday could very well be a nice value for the Cardinals next season at that price, because of where the Cardinals sit on the Win Curve.  *Pease note that the vertical column on the graph represents the $ value attached to each win for a team* As you can see, the value of wins is not equal across the scale. A 5 WAR player to an awful team like the Pirates, who would be on the far left end of the scale is not worth the same amount of money as the same 5 WAR player is to a team in the middle of the bell curve, which represents a team like the Cardinals. Conversely, a 5 WAR player to an excellent team like the Yankees (who would be on the far right) isn’t worth very much either, as the Yankees will likely win around 100 games and the extra wins that the player would represent doesn’t change the odds of making the playoffs much (for a great read on this subject check out this article.)The excellent writers (Erik Manning and Steve Sommer) at Play a Hard Nine have projected the Cardinals at around a 87 win team without Matt Holliday, which is 3 wins above the second place Cubs in their projections. Adding Matt Holliday would likely put the Cardinals in the 90 win range, which almost guarantees a playoff berth. The extra revenue that comes with a playoff berth means there is a higher incentive to add a player that represents “the final piece of the puzzle” to a team that is close to the 90 win level like the Cardinals. Even though the Cardinals are projected to win the central division by 3 games, it should also be noted that most projection systems can vary by as many as 5 to 10 wins in either direction, so to not sign Holliday because the Cardinals are projected to win is a risky strategy.
Overall Matt Holliday is a unique opportunity for the Cardinals. He represents the biggest potential upgrade that the Cardinals could do via free agency at a point where any extra wins are at a premium for the organization. The amount of years being discussed are a bit concerning, but the Cardinals are at a “win now” stage with Pujols, Carpenter, Wainwright, and Molina all in the primes of their careers. If Holliday is signed sometime early next week, Cardinal fans should be happy that John Mozeliak made the best possible upgrade he could make this off-season.