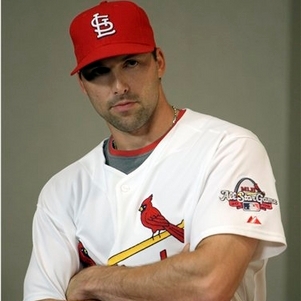 Mark Derosa tries to look really serious in a photo taken shortly after his trade to St. Louis.

Now that the Cardinals coaching staff has been configured for the 2010 season, it is up to John Mozeliak to decide which free agents he is going to make a hard run at first.  With such prominent figures on the 2009 Central Division champs like Matt Holliday, Mark Derosa, and John Smoltz all looking for new contracts, Mozeliak must decide if he wants to put all his efforts into signing Matt Holliday, or if he wants go a different route in his two week exclusive rights period with these players that starts after the conclusion of the World Series.  Several members of the front office, including principal owner Bill Dewitt and general manager John Mozeliak have said that the Cardinals are going to make a serious run at retaining Matt Holliday, but have also conceded that they may not be able to offer the top dollar, so the return of the star left fielder is far from a slam-dunk.

It is this uncertainty that has many Cardinals fans and writers clamoring for the immediate re-signing of Mark Derosa.  Derosa, although he was almost exclusively a third baseman for the 2009 Cards, is very versatile, having played both outfield corners, second, and third base throughout his career.  The thinking is that by signing Mark Derosa early in free agency, he will act as sort of an insurance policy for left field in case Holliday is not brought back, and that Derosa could also start at third base again if Holliday does come back.  Those seem like good reasons to sign Mark now before the Holliday negotiations really begin, but does it really make sense?

It’s been reported that the Cardinals have around $30 million this offseason to spend in free agency if they wish.  The Cardinals seem to be comfortable with David Freese as the starter at third base and Mozeliak has said that one of Mitchell Boggs/Jaime Garcia will probably have the 5th starter spot next year.  This means that the Cards have to find a left-fielder, backup catcher, 4th starter, and possibly a reserve outfielder via trade or free agency.  The farm system’s cupboard was raided through several trades this year, and the Cardinals don’t have a lot of areas of depth like they did going into the year in positions like right-handed relief and third base, so it appears that most of the needs will be addressed through free agency.  Assuming the Cardinals lock up Mark Derosa before trying to sign Holliday, anywhere from 5.5 to 8.5 million is what the Cardinals can expect Derosa to be paid in a fair offer that pays him like the 1.5-2 WAR player he’s likely to be.  I’ve already discussed the projected value of Derosa in another post, so I won’t get into that here.  So if the Cardinals have 30 million to spend, John Mozeliak must plan on Derosa taking up at least 20% of that figure.

If The Cardinals do end up signing Holliday, Derosa would shift to third base(likely hurting the value the club will get out of him) and severely handicapping the club’s ability to address other areas of need.  They could go into 2010 with someone like Matt Pagnozzi as the backup catcher and guys like John Jay and Allen Craig as the main reserve outfielders, but I wouldn’t think that would be plan A this offseason.  I also discussed how David Freese will likely offer very similar production to Mark Derosa next season, so the club would basically be spending an extra 5-8 million on a player who they already have on their roster next year that is making the league minimum.  It is also unknown whether the Cardinals could afford to bring in another starting pitcher if they sign Derosa and Holliday, so the club might have to rely on Boggs and Garcia both starting next year, which would leave the Cardinals very thin on starting pitching depth in case someone got injured or was ineffective.

What if the Cardinals fail to bring Holliday back?  Do they really benefit from signing Derosa now?  Mark Derosa is a fine player, and if Holliday isn’t retained he would likely be the everyday left-fielder.  Derosa would be a valuable player out in left, but he isn’t irreplaceable.  As I discussed in another post, there are plenty of options in the outfield for John Mozeliak to consider, so even if the Cardinals lost Holliday and then Derosa to free agency, there are other outfielders that can offer similar production to what Derosa does.  This negates the notion that Derosa is an insurance policy and needs to be signed right now as Jeff Gordon writes.  Derosa is a good player, and he might be re-signed, but there isn’t a huge benefit in locking him up before free agency.  The risk of Mozeliak having his hands tied if Holliday and Derosa are both brought back outweighs any benefit of signing Derosa immediately as an insurance policy.  Mozeliak just needs to worry about bringing back Holliday, and as far as Derosa goes my only bit of advice to Mo’ is to just be patient.