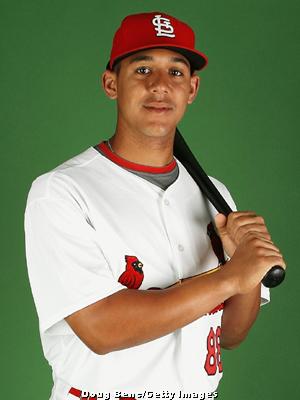 Jon Jay just might be the lefty hitting outfield backup many fans are calling for.

There has been a lot talk recently of what the Cardinals should do for their bench, whether it’s clamoring for a left-handed hitting outfielder or a backup infielder. In a previous post, I suggested that the Cardinals go after an additional starter for depth in the rotation. If John Mozeliak does use his remaining “bullet” on pitching, I figured it would be worthwhile to examine the proposed bench as it stands today, using projected stats from the Chone system.

-Julio Lugo-Lugo was acquired from the Red Sox for Chris Duncan last July, and will cost the league minimum in 2010. Lugo, a right-handed bat, offers a little pop in his bat but is a minus defender at both second base and shortstop. Chone expects Lugo to decline significantly at the plate in 2010, going from an on-base percentage and OPS (on-base + slugging) of .352 and .756 in 2009 to .332 and .687 in 2010. The downward trend in Lugo’s offense is coming from his batting average on balls in play, or BABIP for short. In 2009 Lugo hit .330 on balls in play, which is 13 points above his career average. Chone expects Lugo’s BABIP to return to closer to his career level in 2010, which would explain the projected drop in offense. That would seem to make sense, but Lugo’s BABIP wasn’t high in 2009 because of dumb luck, but because Lugo hit 4% more line drives in 2009. The more line drives a batter hits, the more balls in play that turn into hits, so it’s easy to see how Lugo turned in such a high BABIP in 2009. If Lugo did become a better hitter in 2009, it would mean that his 2010 projected Chone numbers would be low, and that Cardinal fans should look at his Chone projection at the low end of the scale for Lugo’s offense next season. Defensively Lugo projects to be 6 runs below average, which would make Lugo 0.4 wins above replacement, or WAR, a number that could be higher if Lugo keeps his offensive improvements from a year ago.

-Allen Craig-I have already written extensively about Craig, but for a short recap Craig is a right-handed hitter who can play both left field and third. Craig’s value comes in his bat, as Chone projects him to have a .282/.338/.459 line for a .797 OPS. Craig is a rookie, and will also play for the league minimum in 2010. Overall Chone expects Craig to be worth 1.7 WAR in 461 plate appearances.

-John Jay-Jay is a left handed hitting outfielder who often gets overlooked because he doesn’t put up eye popping numbers. Chone projects Jay to have a .277/.333/.401 line in 2010 for a .734 OPS in roughly 400 at bats. Jay is also fairly decent runner, stealing 20 bases at Memphis in 2009. Most of Jay’s value lies in his glove, as Chone projects him to be worth 10 runs defensively in 2010. Combing near league average offense with excellent outfield defense means Jay would be worth 1.7 WAR in 2010, or a full win over what Cardinal hero Jim Edmonds projects to be.

-Jason LaRue-LaRue enters his third season as the backup to catcher Yadier Molina. Chone doesn’t think that LaRue will be much of an offensive threat this year, projecting him to post a .205/.277/.316 line for a .593 OPS in just over 100 ab’s. Overall Chone predicts that LaRue will be 0.7 win player in 2010, which is just fine for a backup catcher.

-Ruben Gotay-Rounding out the bench is the switch hitting Ruben Gotay. Gotay is a second basemen by trade but will likely play all around the diamond if he is able to make the 25 man roster. In 344 plate appearances in 2010, Chone projects Gotay to hit .248/.358/.374 line for a .732 OPS. The most interesting thing about Gotay’s line is his projected 14% walk rate, which would be a welcome addition to an otherwise impatient bench. Chone sees Gotay as a 1.2 WAR player in 2010, which would be fine production from a non-roster invitee.

As it stands today the Cardinal bench looks to be a solid, yet unspectacular one. Each player has his strengths and weaknesses, and everyone but LaRue offers the ability to play multiple positions. That kind of versatility is a must for any club that Tony LaRussa manages. Jay offers excellent outfield defense, decent speed, but little pop. Craig can slug the ball, but doesn’t walk very much and is a work in progress defensively. Gotay is a switch hitter and offers good plate discipline, but likely won’t play at his primary position very often. Lugo offers some speed as well, but is a minus defender, and LaRue is a decent backup catcher. Each of these players should be fine in a part-time role, but only Craig figures to be a worthwhile everyday option if someone were to get injured. When you consider this group to the 2009 Cardinal bench, the 2010 bunch should be a nice upgrade. Duncan, Thurston, K. Greene, and Ankiel didn’t exactly give the Cardinals good production in 2009, so as long as everyone stays healthy this 2010 bench has a chance to make valuable contributions to the roster.